MSCRM and the dreaded rsProcessingAborted error

There are several reasons why this error can happen most of which are quite easy to solve. The key to solving it is knowing how to analyse it properly.

The most common reasons I've come across for getting this problem are as follows:

Generally, the issue you'll face is initially not having an awful lot of information to go on. When you run the report all you get back is:

rsProcessingAborted - An error has occurred during report processing


So, how exactly would you investigate this to get to the root cause? First, a quick checklist:


After verifying the above and if the report still isn't working you need to do a bit more in depth analysis to get to the root of a problem like this.

Yes, you could be working on this for a while...

Run the report in Report Services

Within here your custom reports will live in a folder like the following:

Open up the report you're having a problem with.

Tip: You should get a page asking for your user name and password if the report is set up correctly, and you will need to enter in the following:

If the report doesn't work then it might give you more information about the problem that will lead to the solution. Quite commonly you might see an error such as "Cannot create a connection to Data Source XYZ" or something like this. Or maybe it will be something syntactically wrong with the report and not related to the Data Source. If so it's problem with the report itself that you will have to fix.

If it does run, and you've confirmed the above check list, then the only questions I can think of is:

1. Have you been using shared datasets? If so then the bad news is I don't think these will work with Dynamics CRM. Although, I haven't confirmed if shared datasets can be used with Dynamics CRM so if anyone can confirm this please let me know. But generally, if I see a shared dataset I immediately convert it to an embedded dataset and link it to a shared data source instead. If you've edited it using Report Builder you should be able to choose the MSCRM_DataSource for SQL or MSCRM_FetchDataSource for FetchXml. If you're using visual studio you can create an embedded datasource and then convert it to shared afterwards.

2. Have you been using a child/parent folder structure for parent/sub reports? If so, I don't think you can easily do this in CRM either. I'm sure it's possible, but it's probably tedious to get working. So you'll need to make sure they're all in the same folder and correctly linking to each other.

If all is still unwell, you will need to check the reporting services logs. You can also check Event Logs on the SSRS server, but the Reporting Server logs will give you much more detail. These will be located on the SSRS server at a location similar to the following:

But, before we open that file let's go back to the report in CRM and generate the rsProcessingAborted error again. Once you have go back to the SSRS server and open the latest log file in that folder. There are many types of errors you will see, some of which I will attempt to deal with here:

This generally means you are running the SSRS service under a domain account (as opposed to NetworkService or similar) and it doesn't have adequate rights. In the above example the user "SSRS_Account" was our domain account and it needs to be added to the following groups:

These must match the same groups that exist in the security section of the [ORGNAME]_MSCRM database. For example: 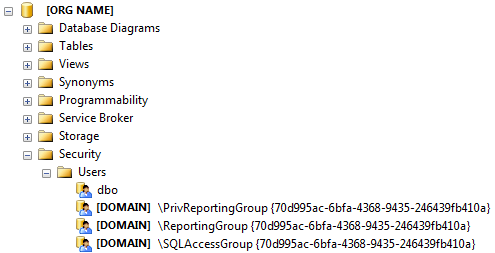 Note: You should not add the SSRS_Account to the group SQLAccessGroup. If you do you may encounter errors installing / reinstalling Reporting Extensions such as this:

Note: As mentioned by Nathan in the comments, he did not have the ability to modify the AD groups of this user. So he managed to solve the problem by accessing the 'Reporting Services Configuration Manager' on the Reporting Server and under the 'Exectution Account' tab he simply unchecked the box here. This meant the report would authenticate through the CRM credentials (which did have access) and not the SSRS account. Worth a try if you have the same issue.

For this error 9 times out of 10 you're running the CRM app pool in IIS under the context of a domain user. To fix this problem you'll have to be a little careful. You should NOT attempt the following during working hours or on a live and active system. Basically what you need is a few SPN records and a bit of trust to help the user context hit the servers correctly. For the sake of this post let's say the user account used on the IIS Application Pool is CRMAPP_Account and SQL Server runs under the context of SQL_Account.

Firstly, you'll need to ensure the account "CRMAPP_Account" has the option to "trust this user for delegation to any service (Kerberos only)": 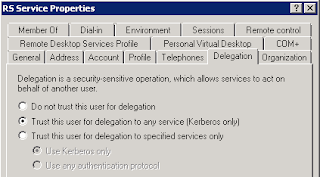 Next, log onto the CRM Appliction server and run the following commands:


The Crm App Server FQDN might be something like CrmAppServerName.domain.com or something slightly different, so you'll need to figure this out for your specific environment. For example, if your server name is CrmAppServer and your domain is FooDomain.local you will have something like the following:

Again, the SQL Server FQDN will be the fully qualified domain name of your SQL Server. So you might have something like this: SQLServer.domain.com:1433. Once you have figured this out, run the above commands and it will add all the required SPNs to get rid of the problem.

No wait! That broke my CRM authentication?!?

And this is why we need to do this outside of working hours! After doing all of this, and as pointed out by James in the comments (thank you!), you may need to enable the site to use the app pool credentials.

If IIS has not been set up for windows authentication you may still notice a problem every time you try access CRM outside of the App Server. You'll be repeatedly prompted for your user details and eventually will see an error like "No authentication mode available" or something similar to this. Firstly, I've read mixed reports on whether you need to enable or disable Kernal-mode authentication, but I have found that it needs to be enabled. The steps do do this are 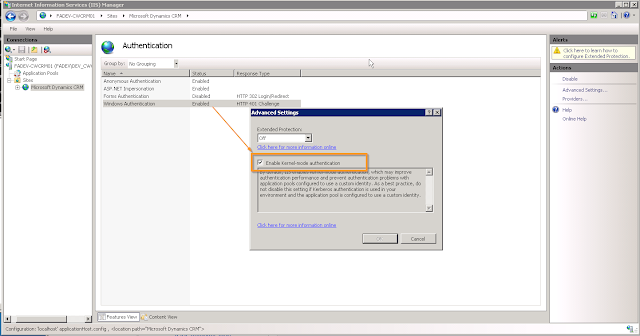 Another problem I have found on some servers is the order of providers can cause problems. If the above doesn't fix the authentication then check the following out too: 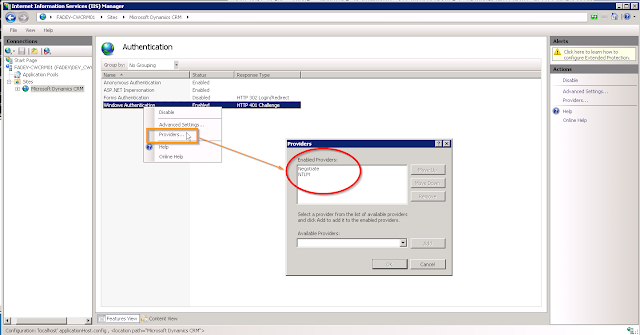 That covers a lot of the problems I have run into. I know there's more out there that I haven't, but hopefully these are the most common that people run into. If you have run into some kind of Reporting Services issue I haven't dealt with here don't be afraid to ask and I'll help if I can!

Posted by Conor Gallagher at 06:30